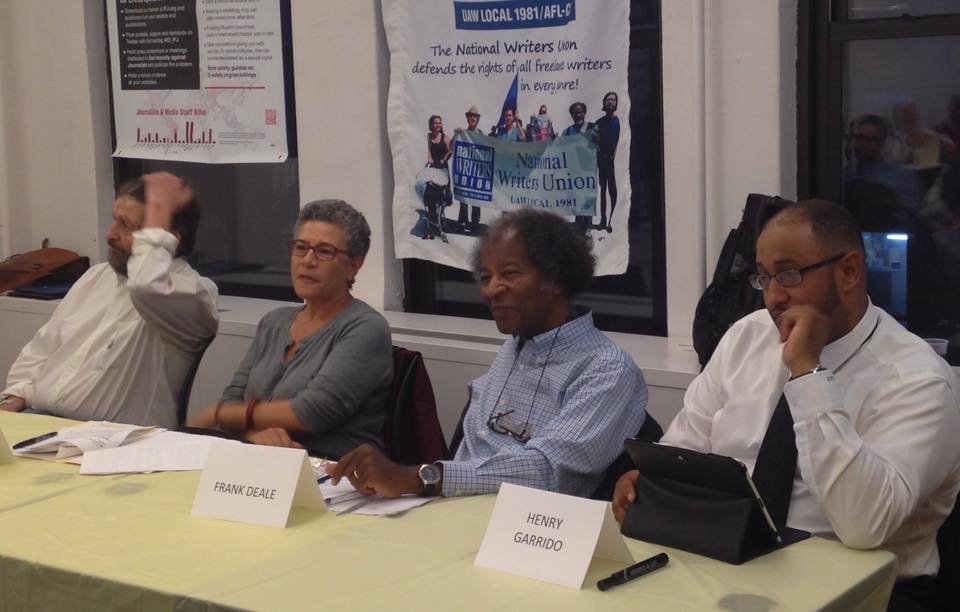 Urge New Role for Unions Who You Gonna Call? Not Just for Trouble

One of the biggest problems with workers’ perspectives of unions can best
be summed up as what one labor leader calls the “Ghostbusters effect.”

“You have a problem in the workplace, who are you going to call?
Ghostbusters,” said District Council 37 Associate Director Henry Garrido,
describing how, to many members, unions enter the workplace to try to
resolve grievances and contract disputes and disappear until the next
problem arises. “So Ghostbusters comes in, takes care of the ghosts, puts
them in the canister and leaves. They come in, the employer did something
bad, you took care of the boogeyman for now and you take off. Well, we
need to change that.”

He was one of four panelists discussing how unions could move from a
defensive footing in an environment of right-to-work legislation, court
challenges and less job security. Through the more-than-two-hour
discussion, hosted Oct. 16 by the National Writers Union and the Metro NY
Labor Communications Council in a Garment District office, the panelists
worked through concerns on what could be existential threats to organized
labor.

“We have to call what’s happening to labor in this country for what it is:
it’s war,” Mr. Garrido said.

Mr. Garrido, who will become DC 37’s executive director when Lillian
Roberts retires at the end of this year, pointed to the recent U.S.
Supreme Court ruling in Harris v. Quinn, which established this summer
that home-health-care workers in Illinois could opt to withhold union dues
but retain union protections, as one of the most-ominous developments for
labor.

Though many public-sector unions say they “dodged a bullet,” Mr. Garrido
said Justice Samuel Alito wrote pages of arguments providing a basis for a
further legal challenge. There are now several cases proceeding through
courts that could further diminish the power of unions, including one
against the California Teachers Association regarding the political use of
members’ dues.

“This is a very dangerous situation,” he said. “To me it is the biggest
threat to the labor movement in over 30 years.”

In Wisconsin, a former hotbed of the labor movement, the Wisconsin State
Employees’ Union reportedly lost 60 percent of its members in the three
years since Republican Governor Scott Walker signed a law eviscerating
collective-bargaining rights, he said.

Carol Pittman, director of political and community affairs at the New York
State Nurses Association, said with potential staff losses there were
opportunities to recruit workers to become volunteer organizers and
representatives. “I think it’s possible to build leadership from within
your members so you don’t really need as much staff,” she said.

On that “Ghostbuster effect,” Mr. Garrido said that many unions fear
empowering their rank-and-file members to deal with employers themselves.
One of the ways DC 37 approached that was to try to organize the 27,000
agency fee-payers who pay union dues but hadn’t signed up to become
members. So far, it has organized 14,000 new members, he said.

One of the wider challenges to union membership is the rise of at-will
workers in retail jobs and part-time labor. Frank Deale, a CUNY Law School
Professor and member of the university’s union, the Professional Staff
Congress, said that his union could show observers that many of its
workers aren’t tenured professors who teach for a couple of days per week
and spend the rest of the time engrossed in academia, but adjuncts looking
for more hours.

“The bottom line is that I think the union, PSC, kind of has to do more to
break down that perception that I think exists of us as being essentially
privileged workers, because the reality is that most of us are not,” he
said

Stanley Aronowitz, a sociology professor at the City University of New
York who recently published “The Death and Life of American Labor,” said a
major issue was organized labor being looked at as an “interest group”
rather than a “class movement.”

“And if it’s not a class movement, then it might as well go home and pack
its bags,” he said. “It’s not a movement anymore; it’s an insurance
company masquerading as a movement.”

After some audience prodding on how to spread an awareness of the labor
movement and incentives for younger workers, the panelists expressed some
optimism, tempered by a call for unions to be more vocal about their
advantages. Mr. Garrido said unions offer higher wages and better
health-insurance and pension deals than non-affiliated workers can get,
but to gain currency among new college graduates, unions needed to argue
on their own behalf and speak louder about college debt.

“We just somehow expect them to gravitate to us like we’re rock stars
coming out of a concert and somehow, because they heard our music, they’re
going to come gravitate to us,” he said.

Mr. Aronowitz said labor should not look to the major political parties or
legislation for help. “The labor movement grew and prospered when it
regarded the law at a distance,” he said, noting the National Labor
Relations Act was one of the sole exceptions. “…We began to feel, I
think mistakenly, that the law was on our side. The law has never been on
our side.”

Citing disappointments from unions failing to “break with” Governor
Cuomo-who has gotten unenthusiastic backing from those who have stumped
for him-and other national Democrats who he said haven’t supported unions’
goals, Mr. Aronowitz later blamed labor for not coalescing around
alternatives like Mr. Cuomo’s primary challenger, Zephyr Teachout.
Instead, he said local organizing and rebuilding a willingness to strike
was a good way to again galvanize labor organizations whose power is
declining.